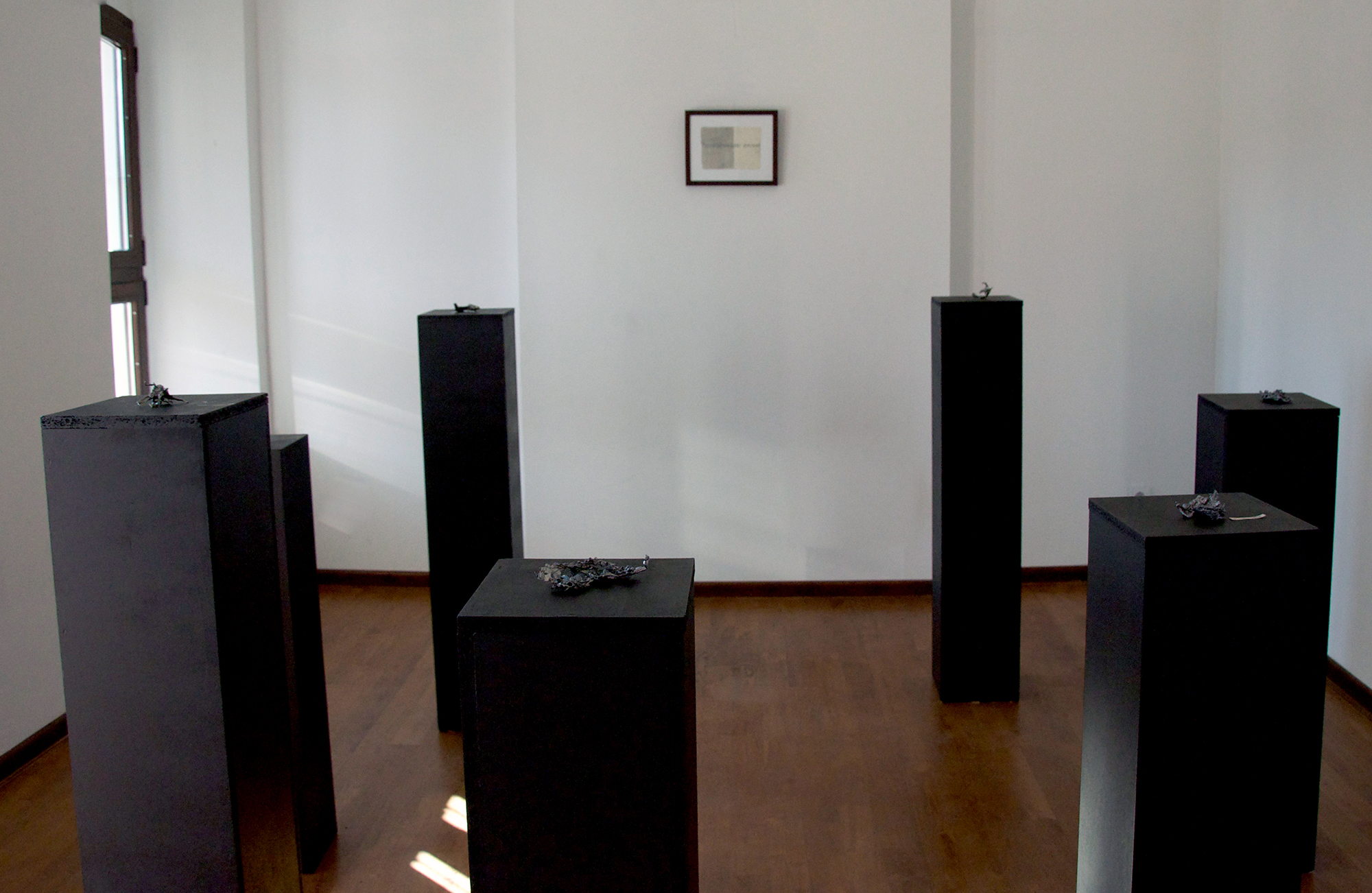 “The Tied Up Balloon” is a series of 71 pencil sketches on paper by Nestor Kovachev that represents the individual sequences of the film The Tied Up Balloon (1967), directed by Binka Zhelyazkova. The Tied Up Balloon is one of the few cases in Bulgarian cinematography where ultimately pure abstract imagery is paradoxically intertwined with a distinct grotesque outline. On the one hand, the film features the material used for making the balloon, as well as the deformities caused by the air currents (and by some intrapersonal logic or plotline at the same time), or by the human actions. On the other hand, within the grotesque frame, the film puts to the forefront behavioural stereotypes, intensified to complete communicative deafness. While the abstract plotline of physical “folding” is characterised with great abundance, the collective behavioural matrices are enclosed within ever enclosing repetitiveness. The combination between the latter two schemes is achieved to the background of a wide epic perspective, subjected to sequential parodic elimination as the film progresses. Thus, with its illustrative might, the film by Binka Zhelyazkova, having been under censorship for over two decades, undeniably stands as a provocative and interesting motif in the development of Bulgarian art of the past few years.

The series of drawings (2013) by Nestor Kovachev is not only an attempt to articulate the film’s impact, but also to bring back memories of an episode from the history of Bulgarian cinematography shot in the form of an installation land art. Commencing from a supposedly existing storyboard of drawings used for the shooting of the film, the artist makes a reversal backward move to the means of expression, highlights and spatial decisions of the drawings. Thus, the wide epic frame within which the story of the film The Tied Up Balloon is developed is compressed alongside its comic film negative in the sketched series; the episodes that can hardly be outlined in the film’s integrity are given independent centres, foregrounding the abstract metamorphoses of the material, the form and structure of each film frame becoming more recognisable as a result. In this way the figurative compositions somewhat naturally begin to look like an appendage of the self of the balloon. The underlying question of “who?” and “to whom?” in Radichkov’s novella that the film is based on, receive a purely visionary interpretation and is eventually left open: the moving object and the people chasing it are stilled when the visual image gains a shared advantage in space.

The dynamic equilibrium between object and figures finds expression in the change of film finale. While the tied-up balloon in Binka Zhelyazkova’s film is torn apart, the one in the drawings by Nestor Kovachev continues to fly freely. Ideologically, however, this reminds us of the immediate relationship between the “people” and the “balloon”, the structural unity of the “chasing one” and the “being chased”, the metamorphose balance between the “animate” and the “inanimate”.

What is essentially significant here is that the drawings by Nestor Kovachev create projections back to the language, they recapitulate the basis of the various lingual systems, the possibilities and impossibilities of “translation” between the languages – not only between the individual languages or between the languages of literature, the cinema and the visual arts, but also, for example, between the different cinematographic languages (the work with citations that the author borrows from the film reminds of the verbal canvas of the silent movies). Thus the problems with the language gradually reach anthropological dimensions. The language outlines that border of unshared value, which separates us from one another (the kid, the donkey, the running city girl). Within the context of this subject matter, Nestor Kovachev sets his second piece of art, integral part of a larger project, prepared for “Hadji Nikoli Inn” Art Gallery in Veliko Tarnovo, to be exhibited in September, 2013. At the exhibition opening there will be a sorceress casting bullets to grant visitors protection against fright, if they wish to, and the moulded shapes will also be included in the exhibition.                   The line in Zhelyazkova’s film about the need for bullet casting as a language-retrieving spell is positioned at a key moment in the plot. This line puts an end to a chaotic verbal skirmish between the Cherkez villagers, concerning the image of the other: the silent city girl, running after the balloon. Within the system of archaic thought the language of the other materialises itself into the cast bullet. It is Nestor Kovachev’s decision to return the static line about bullet casting to its primary proceedings.

Nestor Kovachev has previous experience with working over similar topicalities, replicating famous movies of the 60s, portrayed in a series of drawings in pencil: in 2012 he sketched a series of eighty drawings based on Pier Paolo Pasolini’s film The Hawks and the Sparrows (Uccellacci e uccellini, 1966), later bought off by the Museum of Modern Art in Salzburg, after having been held on display at Heike Curtze Gallery in the same city (Aug. 20th – Sept. 1st, 2012).